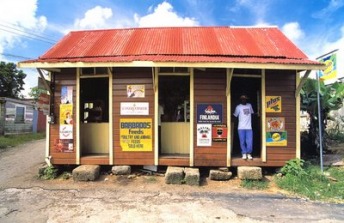 If you didn't at de christening, yuh shouldn't be at the wedding.

- Do not get involved in something if you do not know how it started.

A pint pot can hold a gill, but a gill can't hold a pint pot.

- Not all situations are reversible.

A eyeful en' a bellyful.

- Seeing is one thing, having it in your possession is another thing. (sexual overtones)

A carpenter wife nevah live in a good house.

- Skilled workmen seldom take time off to use their skills for personal advantage.

Bucket gine up and down in well evah day, de bottom boun' tuh drop out.

- Sustained pressure and exertion will eventually lead to a breakdown.

- There is always someone that will make a better lover than the current one.

Bet who bet you.

- Help those who help you.

- Avoiding confrontation can keep you out of trouble.

Crow does fly high, but when 'e come down, de ants does still eat out 'e eye.

- Some people may enjoy great prosperity and be excessively proud of it, but should bad luck surface, they may endure disgrace equal to or greater than the wealth they once possessed .

- Once virginity is lost it is impossible to abstain thereafter.

Crave all, get none at all.

- A warning against covetousness.

- Beware when things come too easy.

- What one person may get away, may cause problems for another.

Common dog does bark in church.

- Uncivilized individuals will conduct themselves in an uncouth manner irrespective of the situation.

- It is impossible to run from your responsibilities.

- The same person who talks nicely to you, will betray you later.

- The sea is not that safe a place; take every precaution necessary.

Don't tek a six for a nine.

- Do not misunderstand a person's real intentions.

- Do not allow haste to create problems for you.

- Children inherit traits and attitudes from their parents.

De dog dat bring a bone will kaah one.

- The very person who gossips with you about other persons may also gossip with them about you.

- The more you show off, the more your faults are brought to the open.

- Attempting to repeat the same action too often may result in disaster.

Donkey got long ear, but 'e don' like to hear 'e own story

- People do not like to hear or accept their own faults.

- Don't wait until the situation gets out of control then to take corrective action.

De devil does find work fuh idle hands to do.

- People with nothing to do, get themselves into mischief

- Spying on others is a waste of time, as they will soon devise ways to out maneuver the spy.

- Once aroused, almost any woman, whether good or bad, can quench a man's lust.

- Don't strive for positions that are beyond your reach.

Don' ship all yuh sugar in one vessel

- Do not risk all your resources in a single venture

- Don't let anyone do or say anything harmful or insulting, under the guise that they are being nice.

- He who encourages you to do certain things is, never around when you desperately need their help.

- The one who flatters you now, may deceive you later

- Don't encourage a friendship only for what you can get out of it.

- The darker the woman, the more sexually exciting she is.

Every fool got ‘e sense.

- No matter how dull and ignorant, everybody is knowledgeable in one area or the other.

Every man yuh see in a shirt and pants en' neider man.

- Do not expect all men to act responsibly.

- You should avoid situations which can be harmful to you.

Every bush is a man.

- Be careful how you talk about people because you never know who might be eavesdropping.

- If you are working in a particular situation, at some point you will become affected.

Evah pig got a Saturday.

- Everyone will pay for his deeds at some point.

- Not all outward signs of friendliness should be taken as genuine.

- Having fool somebody once does not mean you can fool that person again.

- A person will never give a bad report about himself .

- This is used metaphorically to show disapproval of clever behaviour in children.

- Nothing, even if it is helpful, should be forced upon anyone.

- Give credit where credit is due.

- Having physical beauty in itself does not offer any practical benefits

- Elegant accessories are inappropriate when used or worn by those who are not accustomed to such.

Hard ears yuh won't hear, by and by you gine feel.

- If you do not take heed to good advice, you will feel the negative effect of it.

- Not everybody is wise.

- Advantage is often taken of those who are weak.

- Do not do things in a hurry, you may have to re-do it all.

- Before taking on someone else's problems, you should first look after your family interest.

- Necessity often causes people to act contrary to their regular way of life.

- It's no use warning a person to be careful without telling him what it is he should be careful about.

Hol de light fuh de devil tuh sih, and when yuh get a chance, blow it out in 'e face .

- When you know that somebody has bad intentions but is pretending they mean well,

you should play along with them until the opportunity comes when you can foil their plans.

If greedy wait, hot will cool.

- Your patience in a situation will be rewarded.

If you didn't at de christening, yuh shouldn't be at the wedding.

- Do not get involved in something if you do not know how it started.

If black bird fly wid pigeon ‘e will get shoot.

- If you associate with the wrong people you will get the same treatment that they do.

- If you did not successfully convert the opportunities offered in your life, it is unlikely that when there are less or no opportunities available, that you will find success.

It en' de gun dat does kill yuh, it is de shot.

- It is usually the small problems, not the big ones that cause the most difficulty.

It don't tek a big axe tuh cut down a big tree.

- Size, or lack of it, does not limit capabilities .

- An individual can't be corrupted by another who is less corrupt .

- One has to be in someone else's shoes in order to understand what he is going through.

Mek sure better than cock-sure.

- It is better to make absolutely sure that everything is all right rather than assume that all is well.

- A mild reprimand for imitating the behavior of others.

- There is always someone ready to spread anything newsworthy, especially if it's gossip.

- If no names are called, no one can be accused.

- Do not show ingratitude by forgetting the hand that feed you.

- You should not exert great energy on a venture knowing that some unworthy person will benefit.

- There's always someone ahead of you in the game.

- Team-spirit and co-operation is required.

- What may seem like a trivial irritation may create a catastrophe if repeated often enough.

Only a dog does return to 'e vomit.

- Once free of an offensive situation, you should avoid returning to it.

- You rarely forget a skill which you have learnt and practised for a long time.

- Once two people have been lovers, it takes very little for them to become lovers again.

- Only naïve people are impressed by mere show.

- To be overly familiar with those of a lower status creates an atmosphere for them to treat you with scant respect.

- Careless talk can be dangerous.

Respect due to a dog.

- Respect others regardless of their race, gender, religion or status.

- A loose tongue can be dangerous

- Be careful what is said in front of children who might understand far more than you think.

- By taking your time, you can achieve a lot.

Tongue and teet does got words.

- The most loving couples may quarrel on occasions, so don't be overly upset by a little spat.

- A couple can overcome their poverty by pooling their resources together.

- Two tricksters can't get along with each other.

- When somebody tries to pick a quarrel, it is best to remain silent.

- The person who knows he is guilty about something will react accordingly.

When a bird fly too fast he does fly pas' ‘e nest.

- It is never wise to be overly ambitious.

Whoever got clothes hand out does look for rain.

- When people get defensive, it usually means that they have something to hide.

Water does run, but blood does clot.

- Relatives should take care of each other.

- Utilize whatever resources you have available.

When yuh keep company wid fowls and dey shit pon yuh table, it is hell to get out de stain.

- Associating with undesirable people can bring you trouble which could prove difficult to resolve.

Wait til yuh trough put an' bubble in it.

- This is a veritable insult meaning mind your own business.

Wha' yuh do in de dark does come out in de light.

- It is impossible to hide all of your actions.

Whoever got clothes heng out does look fuh rain.

- Whenever people go on the defensive, it means they have something to defend.

- What you don't know won't hurt you.

- If a woman has relations with several men, she will not be sure which one got her pregnant.

- What may pose a problem for one person may not have that effect on another.

- A source of great pleasure may turn out to be a problem later on .

When a dog does suck egg, 'e does get blame fuh evah ting.

- Once a person has committed an offensive act, they are automatically blamed when that offence has been committed again.

- The person who leads you into trouble is never around to help you get back out.

- It is not always easy to back up your boast with the appropriate action.

When yuh see a man fishing in a dry pond, don't call ‘e a fool.

- Do not scoff at someone's actions if you do not know what he is doing.

- You are rewarded or punished for your actions.

Yuh can' stop yuh ear from hearing but yuh can stop yuh mout from talking.

- A warning against repeating what one has heard.

- You are very clever.

- You have an answer for everything.

Yuh don' buy cow when yuh can get free milk.

- Why bother to get married when you are already enjoying the privileges of married life.

Yuh got tuh christen yuh own child before yuh can len' out de christening clothes.

- You must solve your own problems before trying to solve someone else's.

Yuh can' be in de church an' de chapel too.

- You can't be in more than one place at the same time, so you can't know everything.

- It usually implies that you should mind your own business.

Yuh can' want it in de glass and de bottle too.

- You can't have it both ways.

- Never trust people with things which will be a great temptation to them.

- You should always used your common sense.

Yuh can't be in de church and de chapel too.

- You can't be in more than one place at a time.